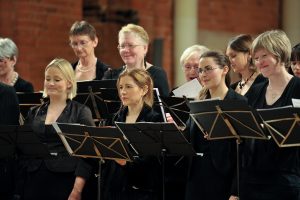 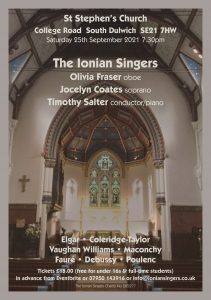 The Ionian Singers with Timothy Salter (conductor and piano) are joined by Olivia Fraser (oboe) and  Jocelyn Coates (soprano) in a programme of  French and English music reflecting the passion combined with elegance typical of its period.  The English composers include Elgar, Coleridge-Taylor, Vaughan Williams and Maconchy, with French music by Fauré, Debussy, Grovlez and Poulenc.  A selection of English folk-songs arranged by Timothy Salter variously for all the performers concludes the concert. 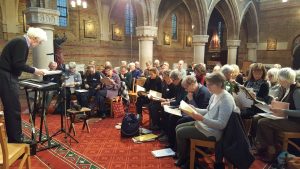 Come and Sing with The Ionian Singers for an afternoon under the direction of their conductor Timothy Salter!  Choral music for unaccompanied voices – part songs and motets from a wide variety of composers familiar and less well-known, and some music for the approaching festive season.

Past concerts and events 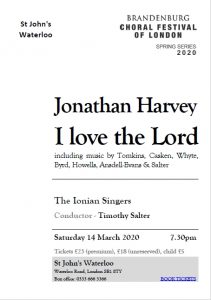 Two English Renaissances are celebrated in this programme: the first, with music from the late 16th and early 17th centuries and the second with music of the past fifty years, performed by The Ionian Singers with their conductor Timothy Salter.

From the first Renaissance will be sung motets by White (the gravely beautiful Christe, qui lux es et dies), Byrd, Weelkes and Tomkins. Their counterpart in lyricism and compositional ingenuity is heard four hundred years later in works by Howells (the rarely-heard Inheritance, with words by Walter De La Mare), Harvey (I love the Lord), Timothy Salter (Miraculum Secundum, a setting of the miracle of the Gadarene swine recounted it St Mark’s gospel) and Nicholas Ansdell-Evans (Ave verum corpus, written for this choir and its conductor). 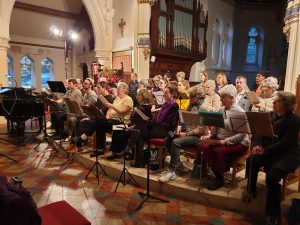 We are pleased to invite you to our Come and Sing event. Following successful events in 2018 and 2019, we are opening our doors for a third Come and Sing afternoon on 1st February 2020. We will be exploring a varied mix of pieces, expertly led by our highly esteemed conductor, Timothy Salter.

If you love choral singing, why not join us for the enriching experience of making music together.
We’ll provide copies of music by Morley, Weelkes, Brahms, Delius, Ravel, Messiaen, Joubert, folk song arrangements and others. There will be tea, coffee and cake to sustain you. All you need to bring is enthusiasm, an open mind and reasonable sight-reading skills.

A Triple Alliance – music from France, Germany and England 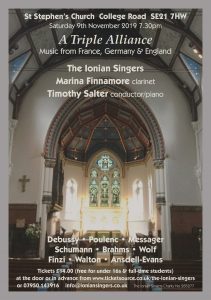 The Ionian Singers and Timothy Salter (conductor and piano) are joined by the clarinettist, Marina Finnamore in a programme of music from France, Germany and England. Finzi is represented in both choral and instrumental form, with the English element complemented by two of Walton’s short choral pieces and the first performance of Ave verum corpus, a new work by Nicholas Ansdell-Evans.  The French music is by Poulenc (from his Sept Chansons of 1936), with clarinet and piano music by Debussy (Première Rhapsodie) and Messager.
From Germany come Schumann’s Fantasy Pieces op.73 for clarinet and piano and two of Brahms’s contemplative part-songs. The concert concludes with Salter’s transcription of two Wolf songs that bring all the performers together.

On line ticket sales from http://www.ticketsource.co.uk/the-ionian-singers
£14 (free for under 16s and full time students)
info@ioniansingers.co.uk
07950 143 916 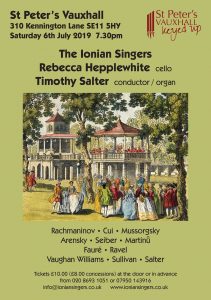 The Ionian Singers with Timothy Salter (conductor and pianist) and the cellist Rebecca Hepplewhite present an evening of music across a continent from Russia to England – well-loved choral repertoire by Sullivan and Vaughan Williams along with less familiar works by Bohuslav Martinů and Cesar Cui, and folk-based songs from Matyas Seiber.  The music for cello and piano includes works by by Fauré, Ravel Rachmaninov and Salter (three sharply-etched pieces, Phantasma). The performers join forces in Arensky’s Three Songs for chorus and cello, and folk-song arrangements by Salter conclude the programme. 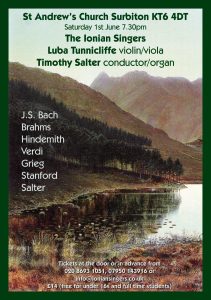 The Ionian Singers with conductor and organist Timothy Salter will be joined by Luba Tunnicliffe (viola and violin) in a concert of music from across Europe.
Choral music by Stanford, Verdi, Brahms and Grieg forms the programme together with sonatas for violin and continuo by J.S.Bach and solo viola by Hindemith, who is also represented by a selection of his French chansons for chorus. A duet from Bach’s Cantata no. 78 and two of Salter’s folk song arrangements complete this intriguing selection of wide-ranging repertoire.

The Miller of the Dee – Timothy Salter (b. 1942)
Flowers of the Valley

After a gap of two hundred years English choral music flourished anew during the second half of the 19c in a later Renaissance, and this momentum has remained in force up to our own times. The music in today’s programme reflects, as may be expected, the changes in musical language over the c.150 years, from the richly Romantic sound of Parry, Stanford and Elgar through the more Anglicised harmonies of Delius and Howells (in his in memoriam for J. F. Kennedy, Take him, Earth, for cherishing) to the contemporary sounds of  music by Timothy Salter and Joseph Horovitz, in whose setting of Wilde’s poem Endymion Jocelyn Coates is the soprano soloist. 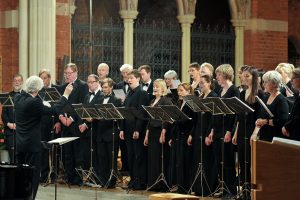 Following our very successful ‘Come and Sing’ last February, we invite you to join us for an afternoon of singing exciting music, under the direction of our charismatic conductor, the composer Timothy Salter.
We’ll provide copies of music by Byrd, Gibbons, Debussy, Brahms, Parry, Delius, Vaughan-Williams, folk-song arrangements and others. There will be tea, coffee and cake to sustain you.  All you need to bring is enthusiasm, an open mind and reasonable sight-reading skills.
Fee: £20 including refreshments.
For more information and to take part please contact Ulla Gray on info@ioniansingers.co.uk, 0208 693 1051 or 07950 143 916 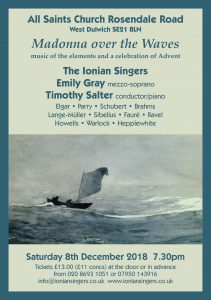 The Ionian Singers with Emily Gray, mezzo-soprano, and Timothy Salter, conductor and pianist, will give a concert in All Saints Church, Rosendale Church, West Dulwich, SE21 8LN.

This concert takes its title from the Danish choral work by Lange-Müller, Madonna over bølgerne. The theme of water and the sea occurs throughout the first half of this two-part programme with secular choral music and solo songs for mezzo-soprano and piano by a range of composers including Schubert, Brahms, Elgar, Stanford, Parry and Sibelius.

Music for Advent and Christmas form the second half of the concert. The choral works will include music by Sweelinck, Poston (The apple tree), Cornelius (The Three Kings), Timothy Salter and Russell Hepplewhite. The Nativity is celebrated in a group of songs by R.Strauss, Fauré, Ravel and Howells (Come sing and dance). 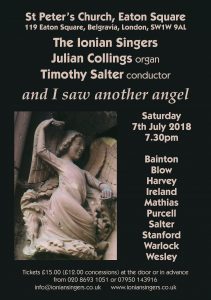 and I saw another angel

The journeying of the spirit between bleak despair and serene joy is portrayed in this programme of sacred music to be given by The Ionian Singers and organist Julian Collings, conducted by Timothy Salter. The plea for help in affliction is most tellingly expressed in Purcell’s  Jehovah, quam multi sunt hostes, more restrained yet still intense in his Hear my prayer and Blow’s Salvator mundi. Anguish and despair run through Eliot’s words in Harvey’s The dove descending, and earthly vanity is lamented in Warlock’s setting of Webster’s All the flowers of the spring. Salter’s Scuto circumdabit te echoes the search for reassurance heard in the Purcell, with the image of a shield occurring in the texts of both. From the 19c and early 20c come four rich settings: S.S.Wesley’s Wash me throughly, two rarely-heard anthems of Stanford and Bainton and Ireland’s Greater love hath no man. Three of Mathias’s Rex Gloriae motets complete the programme. 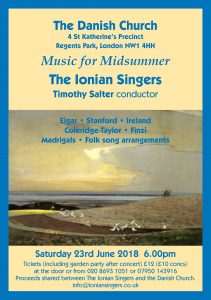 The Ionian Singers under their conductor Timothy Salter will give a concert in the Danish Church on Saturday 23rd June at 6pm sponsored by Danish Women’s Association.

Music by Elgar, Stanford, Coleridge-Taylor, Ireland, and Finzi will range through the pastoral, the amorous and the philosophical. English madrigals and arrangements by Salter of popular English and Danish folk songs complete a programme of music to delight on a summer’s evening.  After the concert you are invited to the Church garden party celebrating Skt Hans Evening

Five movements from Byrd’s Mass for Four Voices open and close a programme that brings together music of the English Renaissance, the Baroque and recent times.  The Ionian Singers with their conductor Timothy Salter perform motets by Gibbons, Weelkes and the 20c English composer Edmund Rubbra.  They are joined by the violinist Eulalie Charland in the Norwegian composer Knut Nystedt’s Ave Maria.  Solo violin music by J.S.Bach, the Icelandic composer Haflidi Hallgrimsson and Salter, and the first performance of a short chorale prelude for violin and chorus on the chorale Es ist genug -a joint effort between Bach and Salter – form the rest of the concert.
Concert Diary 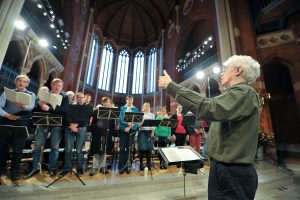 More Info
Looking for a change from Fauré’s Requiem and Beethoven’s 9th? Come and join The Ionian Singers for an afternoon of something different, under the direction of our charismatic conductor, the composer Timothy Salter.

The Ionian Singers is a chamber choir performing music from the Renaissance to the present day. We sing motets, anthems part-songs,folk-songs and contemporary choral music, mostly unaccompanied but regularly including music that incorporates some unusual instrumental ensembles.

Our speciality is singing ‘the music that other choirs don’t sing’ or, to put it more formally, ‘less-familiar or unjustly-neglected repertoire’.

We would love to welcome you to our musical afternoon. We’ll provide copies of music by Tallis, Byrd, Stanford, Elgar, Brahms, Skempton, Rubbra, folk-song arrangements and others.

All you need is enthusiasm, an open mind and reasonable sight-reading skills. 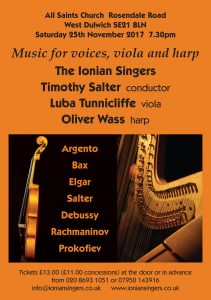 Music for voices, viola and harp

The Ionian Singers and their conductor Timothy Salter will be joined by violist Luba Tunnicliffe and harpist Oliver Wass, members of the Pelléas Ensemble, for a concert on Saturday 25th November in All Saints Church, Rosendale Road.
An exciting mix of music arises from the unusual combination of voices and the two instrumentalists who will perform both as a duo and with the choir. The programme will include English music by Bax, Elgar and Salter (his Nocturne for harp, viola and chorus) and Russian works for the duo by Rachmaninov and Prokofiev (movements from Romeo and Juliet).  A selection of piano pieces and songs by Debussy, transcribed by Salter, and a rarely heard choral piece by American composer Dominick Argento, his robust setting of Keats’ celebratory poem Hymn to Apollo, complete the programme.
Concert Diary 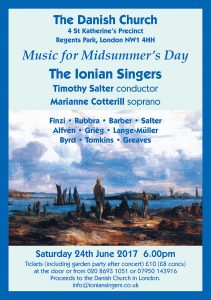 The Ionian Singers under their conductor Timothy Salter, with Danish soprano Marianne Cotterill gave a concert in the Danish Church London on Saturday 24th June at 6pm.  This concert was sponsored by The Danish Women’s Association.

The concert included Scandinavian music by Grieg, Alfvén and Lange-Müller together with music by Finzi, Rubbra and Barber. Arrangements by Salter of popular English, Danish and Swedish folk songs, and madrigals by Byrd and Greaves completed a delightful programme of music to celebrate midsummer.
Concert Diary

The programme included unaccompanied choral music by Schein, Poulenc, Ravel and Hindemith.  Laura Snowden and Joo Yeon Sir will play two of their own works and music by de Falla, Mompou and Debussy.  Their arrangements of chorale preludes by J.S. Bach will include two with chorus.  A group of Timothy Salter’s folk songs, including the first performance of two new ones, complete the concert.

The English Mystic
music of joy and contemplation

Sing Joyfully
The programme included motets and anthems by Byrd and Gibbons, commencing with Byrd’s ‘Sing joyfully’.  Moving through the twentieth century music will be performed by Stanford ‘God and the Universe’, Elgar ‘O Wild West Wind’, Howells, Finzi and Walton, Timothy Salter ‘The white and the walk of the morning’, Philip Cashian ‘Music for an empty sky’.  Arrangements of Salter’s popular English folk songs will complete the programme.

A Sequence for Lent
Programme will include a sequence of chorales by J.S.Bach alternating with motets by Byrd, Bruckner and Victoria. Bach’s motet ‘Jesu, meine Freude’ together with anthems by Purcell, ‘Hear my prayer, and ‘Lord, how long wilt thou be angry?’, motets by Bruckner and ‘In Paradisum’ from Fauré’s Requiem will also be performed.

Programme included part songs by Stanford, Elgar and Rubbra and English folk song arrangements by Timothy Salter together with extract from Salter’s ‘Invida aetas’ and ‘He wishes for the Cloths of Heaven’ by Russell Hepplewhite.  American choral music by Horatio Parker and Samuel Barber will complete the programme.