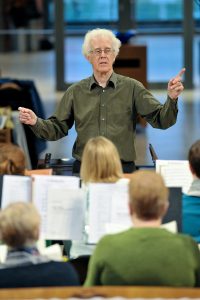 The Ionian Singers is a chamber choir of about 25 singers, based in London, with a national and international reputation based on performances and recordings. They give concerts in London and elsewhere.

The choir is known for its commitment to new music, has given many first performances and has commissioned new works from several British composers.

The programming and recording policy of The Ionian Singers is to search out less familiar and unjustifiably neglected repertoire both sacred and secular from the 16th century to the present.